A Ramble in the Shambles 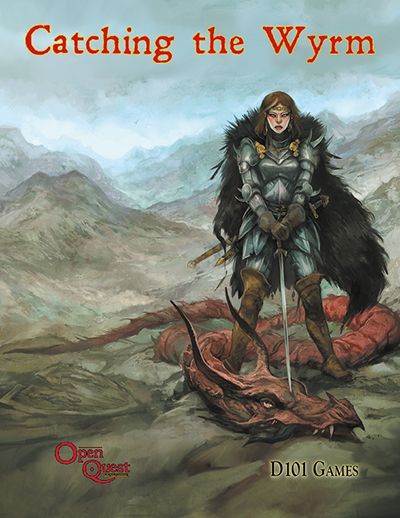 This 28-page adventure is a full standalone adventure that can be played in one or two four hour gaming sessions. It can be played as the final part of an introductory scenario arc, that starts with The Road Less Travelled (OpenQuest Main Rulebook), and continues with The Lost Outpost (the OpenQuest Quickstart).

it details a Quest where the characters arrive in Tent Town, a semi-permanent settlement that sits outside the cyclopean walls of the ruined city of The Shambles. They are quickly approached by one of the local shopkeepers, a reformed nomadic raider, who asks them to take up the task of dealing with a wingless immature dragon, known as a Wyrm, that has been sighted over the walls in the nearest district of the city known as the Squares. Whether they complete this Quest to the letter or forge their own path, is completely up to the players.

Writing Catching the Wyrm, which was originally meant to be a quick start adventure, really brought to mind that I tend to write three types of adventure.

Location-based. Be it a classic dungeon or a journey based adventure with ruins and settlements along the way, this is where the adventure is described as a set of locations, each with its own inhabitants, treasures and secrets to be found and interacted with. Obviously, you’ll be seeing lots of this in OpenQuest Dungeons, but The Road Less Travelled in the main OpenQuest rulebook is firmly of this type.

Scene Based. This is where I envision and describe the Quest in scenes, as you would a play or movie. Each scene is a loosely scripted encounter. There are elements of the location-based adventure, but there’s also lots of direction on how the encounter could play out to give the Referee the gaming juice that they need to get their imagination going. I’m pretty clear that any of the scenes may not survive contact with the players as written because I’m aware that this type of write up can fall foul of Referee Railroading during play.

Sandbox. This is similar to a location-based Quest but really goes to town on the NPCs, places, items and secrets – the things – that the characters can potentially encounter, without giving the Referee the same level of guidance on how to link those things together. It’s completely up to the players as they wander freely around the sandbox how the Quest emerges. Plot and narrative can be suggested by hanging suggested events, which are triggered if certain conditions are met, off locations – and this was the approach that I took in the for some of the Quests in the out of print Life and Death Saga.

I started writing Catching the Wyrm as a mini-Sandbox that features two adventure locations from The Shambles, as a taster for a larger book which features the full set of ruins. Tent Town is a ramshackle adventurer’s settlement, that provides safety, services and if the players want it intrigue. Then into the ruins proper. The Squares, is a middle-class suburb, with residential blocks, theatres, libraries and even an amphitheatre.  Swarming with Goblins, zombies and corrupted horrors. The problem is that it’s about 50 pages long without art or maps, and it’s still not complete. So I took what I had, ran it as a playtest and took the events in the playtest to write it up as a scene based adventure.

I’d like to think that the full sandbox will see the light of day at some point.  With a Tent Town that evolves depending on which faction the characters support and how much of The Shambles’ riches flow into its economy. With the full version of the Squares plus at least another seven districts that make up the entirety of The Shambles.

The adventure in both printed and pdf form should be out at the end of the month, after going to backers who qualify for a free copy.