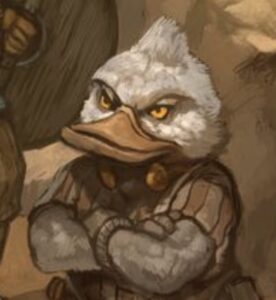 OpenQuest has a long tradition of including rules for Ducks as a playable non-human race/culture.

They have a firm place in popular culture, courtesy of the animated adventures of Donald and chums.

Yet they are a blank canvas. Unlike other fantasy non-humans, there’s not an established canon of history in either fantasy or folklore.

Twagedy and Triumph. Their short stature, odd appearance and argumentative nature may make them an obvious figure of fun. But dig deeper into the detail of their lives, and you will see the struggle of their underdog lives, and take pride in their achievements against the odds.

A fan favourite, all of the above have inspired some truly great fan work over the years, as people have taken Ducks to their hearts and made them their own.

As a replacement for Halflings, I’ll leave that there and say no more 🙂

And yes it is a bit silly and lighthearted, but you have to have those moments in a game. Especially a game that can often have monster hunting and investigation of the terrible acts of dark cults as its focus.