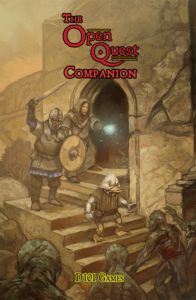 This selection of additional optional rules is the next release for OpenQuest. It is currently on sale, as a free book, as part of the pre-order for the main OpenQuest 3 rulebook.

While this is not the finalised contents list, here’s a peek at some of the subjects covered in the Companion.

The One Magic System. I use this quick system for convention games. Here it is expanded and balanced for campaigns that do not need or want to use OpenQuest’s Three Magic System.

Adventuring Associations. So, your merry band of adventurers have formed a band that has endured at least one caper and want to create a shared base of operations? This article shows the benefits of the characters creating their own Adventuring Association or joining an existing one.  Also, an example of how to use the Membership skill.

Quick Quest. This is how I run OpenQuest at my table to account for the sudden need for numbers to hang the rules off. Such as when a random non-player character suddenly gains importance through interaction with the characters, and a quick profile is created on the fly for physical or social combat.

Near-Death Experiences. What happens when a character should die, but the player spends a fortune point to avoid the final curtain call. They end up caught between worlds, and the valuable insights they can gain while waiting to come back to life are covered in this article.

Tools for World Building. To go alongside the Campaign Questionnaire from the main rulebook, a series of questionaries, random tables to help referees set up adventure locations in their games.

Also, making a return from the pages of the main OpenQuest 2nd Edition rulebook in a revised and possibly expanded form, are the following.

Other World Quests. What exactly happens when the characters go adventuring in the Other Worlds.

WAR! The realm is ablaze with conflict, and this article deals with the consequences to the adventurers no matter their power to affect the outcome.

Realm Quests. This article details how to define nations and states in OpenQuest, and the sort of Quests that arise because of events in the realm.

It is currently heading towards a summer release.