OpenQuest goes to the Conventions, 2021 edition

So convention going for me is seeing a cautious return after lockdown lifted here in the UK earlier this Summer. For the time being its a blend of Online and local face to face (Grogmeet in Manchester next month).

So this being the year of OpenQuest’s release and my excitement over that, means I’m well up for running it. Here’s the games I’ll be running soon. 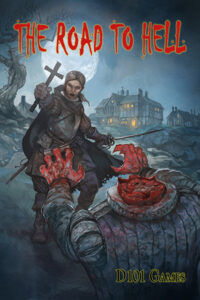 Your band of merry adventurers were almost out of work, due to the new King James cracking down on the escapades that were so profitable during Queen Elizabeth’s reign. Fortunately, you have a letter of employ from the Queen’s Astrologer Dr John Dee, who has long been exiled from Court to the town of Manchester in the North West of England. You’ve been travelling North on the muddy roads, coping with the steadily worsening weather and avoiding bandits. It’s been grim.

Now just outside Chester on the final leg of the journey, it’s all about to get Hellish.

This is a Dark Fantasy Adventure for OpenQuest, set in the early years of the Jacobean Period, inspired by old Hammer Horror and the works of Clive Barker. Maturity is required, but no knowledge of the system or setting is needed.

I’ll be running this at both Furnace Online Games next weekend (which you can still sign up for via its Warhorn page) and in person at Grogmeat in Manchester on Saturday 11th November.

I’ve gone full OpenQuest at Grogmeat, where in the afternoon I’ll also be running the following.

Every year the best Goblin Hunters, sponsored by the five Dukes of Gatan, assemble at Castle Uprising in the Imperial Heartlands. After a great feast, attended by the Emperor, they enter the Valley of the Hunt, which has been carefully stocked with Goblins and other related creatures.  Whoever brings back the most heads at the end of the day, is declared the winner of the Great Goblin Hunt.

This year your band of adventurers have been invited to join the Fifth Annual Goblin Hunt, for the glory of your sponsoring noble and your personal financial gain.

I’ve posted a bit more about this in a previous post, which gives a bit more insight into how I put this adventure together. Although I’d avoid reading it if you are a prospective player since it’s got a few spoilers 🙂