More Detail About The Lost Outpost

This is the OpenQuest Quickstart Rules + Adventure. If you are new to OpenQuest or a returning old hand wanting to see what’s changed, or simply want to pick up an introductory adventure suitable for newcomers this is for you.

I posted about this when I released it, but here’s a more detailed view, along with some design notes at the end. 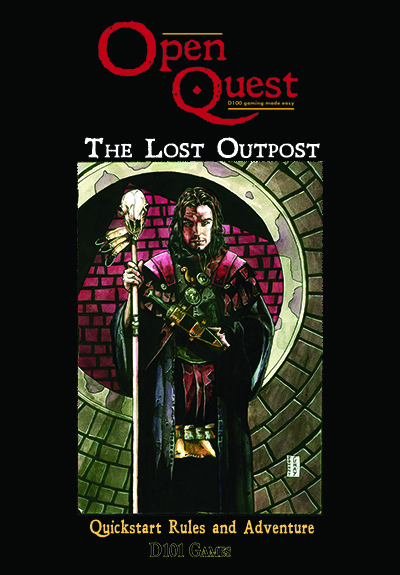 A bit more about what it contains.

The Rules is a cut-down selection, that has the basic mechanics explained, one of the three magic systems (personal Magic), a slightly cut down version of Physical Combat (with some of the combat actions left out). In short just enough rules so you can play the Adventure.

The Lost Outpost is set on the borderlands of the Empire of Gatan setting, which is the example in the OpenQuest Rulebook. Intertwined with the numbers you need to run it, there are lots of bits of explanation about the non-player character’s motives and what they are doing in the adventure in the context of their cultures and religious beliefs. I was very keen that the adventure shows that these more intangible things are just as big a driver in play as the numbers on the NPC’s profiles. Even for the “mooks” who are the accompanying warriors of the higher ranking NPCs.

Structure wise it’s a simple three-beat adventure in that the Referee presents the set of the situation in-game, the players explore the encounter area where the situation is, and then with the Referee’s help bring it to a resolution. Within that explanation that I try to show that player choice is central to the Quest plays out at the table.  If this sounds a bit worryingly story-game to you, don’t worry its presented with a reassuringly old-school introduction for both the Players and Referee, an adventure (or Quest as I call it in OQ) made up of six encounters – all placed on this wonderful map by Glynn Seal (of Midderlands fame). 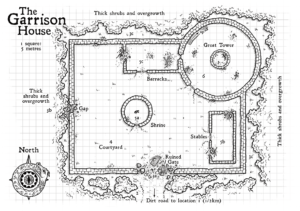 Take note, this edition of OpenQuest is a lot darker in tone than previous ones and the quickstart reflects that. There’s a section that points out its mature themes in the introduction of the Quickstart. I’m not sure whether this tonal shift has been because of the fact that this edition’s art is black and white, or (more likely) because of the implied Dark Ages/Early Medieval setting, combined with I’m an adult playing with other adults.

I used the full character generation rules, with six of the ready-made concepts, to make these starting level characters. From playing them you’ll get a good idea of how powerful new characters are, and what their limitations are. If you choose to continue the adventure, by either using the adventure in the main rulebook or the upcoming adventure pack (The Edge of Empire) you can continue to use them.

Here’s one of them Amon Durak, with comments on the pdf that explain how he works as a starting player character in OpenQuest.

Overall the Quickstart aims to give players new to D100 roleplaying games, a taste of what the full rulebook contains, and how D100 role-playing is different from D20 Level based games.

This is probably the most involved adventure I’ve written since Life and Death, a three adventure collection that I released for OQ1 and revised slightly for OQ2.

I had three aims with it.

It was a struggle to get the three aims of the adventure across without vastly expanding the page count, and necessarily padding it. I think I got there 🙂

On a personal level, I want to be able to point to people new to OQ and say, “that’s what OpenQuest is”. Not have to, recommend they read the rulebook and then a follow on adventure pack to get what the game is all about.