The Three Icons of the OpenQuest Covers

The sharp-eyed among you will have seen the three reoccurring characters on the covers of the main OpenQuest rulebook, the recently released OpenQuest Companion and the upcoming OpenQuest Dungeons.

This was intentional I asked Jon Hodgson to do this, but I wasn’t prepared for all the good-natured comments on the trio, especially theories of what the Duck looks so cross, that I got every time I previewed the cover. So when I sat down to write the Early Bird backers’ adventure for the Kickstarter, Catching the Wyrm, I made sure that I wrote them into the adventure. So here’s a bit more detail from the upcoming Catching the Wyrm scenario, In that adventure are more details about the characters including full game profiles.

These three characters are part of a larger informal organisation, dedicated to helping Dragons survive in the wild. While others recoil in fear, the Dragon Helpers point out that Dragons helped end the Age of Blood, when they rebelled against their Blood God Masters.  They are not entirely sure what they are doing but feel strongly enough to put everything at risk. In the Empire of Gatan, being a Dragon Helper is a heresy punishable by a very public and gruesome death. 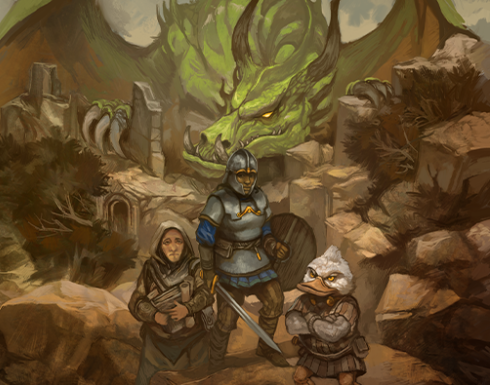 The Great Dragon Greenbach and the Dragon Helpers from left to right: Tres the Transformed, Shalla Dragonsaved and Ogg the Wise

This small group were sent to the Shambles by the leader of their Scale. Scales are the small cellular units that the Helpers organise themselves into, for protection and effectiveness. The leader or Dragon Friend in Ossoway is a librarian is, had found mention of the Great Green Dragon in some documents that have ended up in her Libraries’ archives.  As novice Seekers, who have just been initiated into the secrets of this Magical Society,  they are fresh with the joy and hope that they will finally get to meet a dragon and have meaningful discussions.

Tres is a Sorcerous Adept, who was kicked out of the Imperial University of Wizardry, after being caught in the forbidden library reading prohibited books on Dragon Lore. They would have got this knowledge ripped from their brain by the Imperial Inquisition, before some form of hideous punishment suited to the crime, but they were rescued by the other members of their Scale, Ogg and Shalla, who just happened to be in the imperial capital after their Scale Leader had an intuition that an important person to the group who shared their passion for Dragons would need saving. This is how Tres joined the group, and while they like being around people who like dragons, and value their knowledge, they are still not one hundred percent sure that being out in the field on dangerous missions is exactly what they want out of life.

Her home village burnt down to the ground during the invasion of Gatan by the Burning Heart Horde. During the attack, a Dragon saved her and the other survivors. “They are not the only ones who wields fire”, she regularly says when telling the tale of her escape.

She joined the Dragon Helpers after a stint in Imperial Legions, where she learnt about the group from officers while hunting down a dragon that was terrorising the borders. Years later the trail led to the Scale that she is currently part of.

Secretly Ogg isn’t fully on board with the Dragon Helper’s mission. His thinking is that Dragons love gold, so there is gold wherever there is one. His Scale Leader is well aware of this, he’s betrayed himself during many long drunken conversations they have shared over fine wines but thinks that the spiritually devoid Ogg has potential for great enlightenment when he actually meets a dragon. His colleagues are completely unaware of Ogg’s lust for Dragon Gold.  Ogg on the other hand is aware that his colleagues are dedicated to the study and preservation of Dragons, something he thinks is beyond stupid, and this often makes him ill-tempered and impatient with them.